The best I've ever read on Don't Ask, Don't Tell

In the early 00's, I spent six months of my life on a story for Salon about three closeted gay army officers (part 1, part 2). It was the best story I'd ever done, and it won a GLAAD Media Award. It pales in comparison to this piece:

My Life as a Gay Officer. 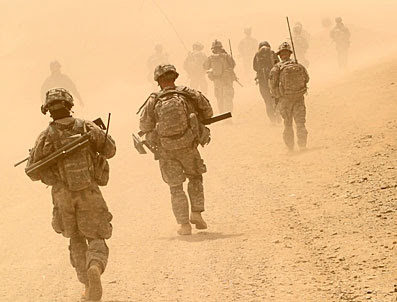 It is written from inside the war zone in Afghanistan, by an Army Lt. Colonel serving there on active duty.

It's lonely in the Middle East. I lived in Kuwait for two years. It's hard on anyone--and no one was shooting at us.

Here's a glimpse of his life, from the piece:


But I want to tell the guys I eat lunch with every day about my partner. After all, these are the guys I risk my life with—the guys who think they know me. I can tell you every detail of how each of them met their wives; how one of them still feels guilty about an affair he never had, but thought about; how one of them cried so hard the day his son was born.

Yet they don't know much about my life, except the most superficial details. Over the years, I have become good at evading and changing subjects artfully. To slip up—using the wrong pronoun when describing whom I was with during R&R, or mentioning who I talked to on Skype last night—is no longer something I worry about. I have become so good at this lying game it eats at my soul.

I cried reading much of it. It's the best thing I've ever read on gays in the military, because it's so incredibly candid. He cops to shitty things he's done, laws he has broken (confiding to close friends in the Army that he's gay, and married broke the law), he doesn't whine or preach, just lays out what life is like for him, and the isolation he feels.

I hope you'll pass it along.

Congress is expected to vote on overturning Don't Ask, Don't Tell this week. The vote is starting to look like it will fail. John McCain and some others are saying the country needs to wait, and not cram it down our throats. But another year--or two or five, or ten years, because a Republican house of Congress will surely refuse to repeal the ban--means another year or two or five or ten years with guys like this living like this.
It matters every single day to these guys. It's not politics to them: it's just a right to live without lying, without sealing themselves away

I hope you this piece helps some people see what life is like for the hundreds of thousands of gay soldiers living this way every day. I hope you'll pass it on.

that's from the bearded gayguy on last week's Modern Family, the second-funniest sitcom after The Big Bang Theory. sitting by the pool doing nothing on vacation sounded horrible to him.

i was just talking to a friend about this yesterday. he diagnosed me with Restless Leg Syndrome of the brain. (his version was slightly unfunnier.)

he noticed that i was not reveling in my book's success very much--always 43 new little projects to keep it going. i don't know how to revel. or vacate. or relax without doing something.
at 3:51 PM 2 comments: Links to this post

Adventures in radio and middle school

Friday was a roller coaster.

I woke up early after a late night doing an event at DePaul and then dinner with old friends. I drove out to Navy Pier on Lake Michigan to do Chicago NPR station WBEZ's morning show "Eight Forty-Eight." I was booked for ten minutes sometime between 9 and 10 a.m., but the opening segment was a phone-in and they lost the line with the guest at the last minute. 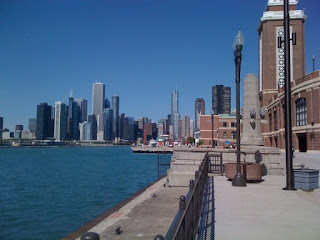 As the national news recap at the top of the hour ended, the producer literally ran out the waiting room and grabbed me. We bolted into the studio, where I could hear the host already introducing me. I grabbed a chair and slapped the headphones on as he finished the first question. I leaned into the microphone just in time to answer it.

I didn't thank the host by name, because I had not yet heard it--or seen the guy or spoken to him. It was scary for a minute, but the host was bright and engaging, and we settled in pretty fast. I listened to the podcast on their site, and I don't think you can tell. Can you?

If this had happened this time last year, I would have been terrified. But it happens all the time in that biz. 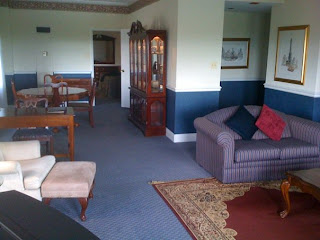 Then I checked out of my hotel that I was sad to leave so soon: the presidential suite at the luxurious Belden-Stratford in Lincoln Park, just off the lake. I barely saw it. (They have a long relationship with DePaul and were out of regular rooms, so gave us this one for a standard room price. Nice. It was bigger than my apartment.)

Then I hopped in the rental car and headed out for two events at Eastview Middle School, which had been arranged less than 24 hours earlier. I got stuck for two hours in a traffic jam and almost missed the first one. My iPhone GPS kept adding on to the trip time and said I was going to arrive ten minutes before the first group left. I called the wonderful librarian who arranged it, Stacey Jones, and she was very gracious and lowkey about it, but I didn't want to let her down, or the kids. I called my sister, and she guided me to a shorter route, and ran into the library just as the bell rang and the first group settled in. 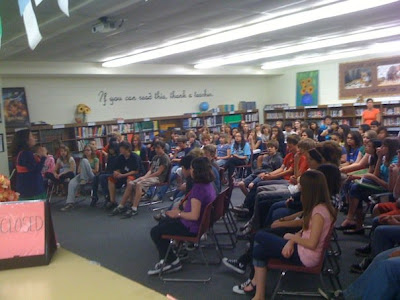 I am so glad I made it. Those kids were great. Stacey had pulled the thing together in a few hours, and emailed at 6:48 a.m. that morning to say, "Eastview is a buzz....thrilled!!" I thought she might just be trying to make me feel good, but I could feel it as soon as I rushed in.

The fire code for the library is 100, so they had to limit the classes coming, and they saw some kids actually sneaking in. That gave me a chuckle. Luckily, they were smart enough to let the sneakers stay: any kid trying that hard to learn something deserves to.

This was my first middle school, and they were 2-3 years old when Columbine happened, so I wondered how interested they would be. I knew I was in good shape early no, because they sat very still in their seats listening.

For adults, that's a bad sign. I speak without notes and watch the audience and try to read them as I go and adapt on the fly, and I know what attentive adults look like: they smile, nod . . . they get more animated.

Kids are almost the opposite. They get very serious and stare straight at you, without moving. My first high school I thought I had bombed, and a teacher laughed at me (nicely) when I told her they were too quiet. "You know how hard it is to keep a roomful of teenagers quiet?" she asked. (Something like that.) Quiet is golden. I've done a bunch of high schools this spring, so I get it now. This room was stone silent.

And they asked a lot of questions. Good questions. I love kids, because they are right out there with what they feel. They just want to know. I told them a bit about Patrick Ireland and they had all sorts of questions about what else happened to him and how he was now. They are wildly curious and just want to learn. I love that.

They are forgiving, too, once they like you. I have a racing metabolism, eat five times a day and my blood sugar can drop fast and I get a little woozy. I had no time for lunch or even much breakfast and near the end of the second event, close to 2 p.m., I was in the middle of some anecdote and completely forgot why I was telling it. Whoops.

Right in the middle of a sentence, I had no idea how it was supposed to end, so I said, ". . . and I've lost my train of thought. Hmmmm. Why was I telling you that?" (I think. A teacher taped it, so I'll have to see exactly what came out of my mouth.) I was roaming the area in front of the audience as usual, but happened to be close to the podium, so I stepped over, leaned down on it and tried to think. Then I became aware that that looked much worse: they might think I was having a stroke or something. (To kids, I'm pretty sure I look ancient.)

Luckily, the rest of it popped back into my head pretty fast, but a few minutes later, it happened again. I didn't cop to that one out loud, but I started to feel light-headed and wondered if I'd stumble and drop to the floor at some point. Not that I actually would, I just started having those crazy fears.

(Worst stumble to date: two minutes into my otherwise Best Speech Ever in Miami the week the hardcover launched last year, I flung my arm out in a sweeping hand gesture and whacked my open water bottle right into a woman in the front row. Ouch! I also doused a row of expensive coffee table books standing face out. The woman was so nice, she actually volunteered to clean up the water a bit so I could go on. That is nice audience member.)

Nobody got wet here. I kept it together and the kids seemed to get a lot out of it. I know I did. 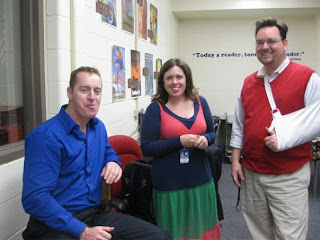 Lots of teachers and the principal came and were very complimentary. They were great. It's been interesting visiting schools, because you can really feel the vibe walking into a good one. When I meet a principal and librarians and faculty who are excited to have an author and each one has about eight different ideas about how to use that to engage their students and get them excited about learning . . . hell, of course their students learn.

Kids are naturally curious, but so much of the education system seems designed to bore them. They have these wildly energetic minds (and bodies), and way too much time is spent telling them to sit quietly in a chair and listen. Their minds are on: keep them on. 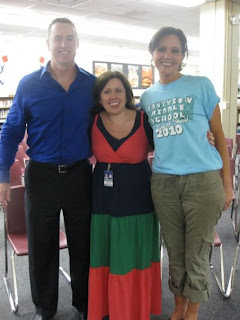 You can tell the people who get that. This school was full of people who did.

But for me, this was the best moment. A teacher came up to me afterward with her daughter. She apologized for walking out during my first session. She said she went to call her daughter on her cell at her high school to say she had to hear this. She drove to the high school, checked her out, and got them both back in time to watch me start over the next period.

Wow. I think that is my favorite booktour story ever.
at 1:24 PM 4 comments: Links to this post

Over 30 pages of new material (50 since hardcover).

Get Notified when it comes out.

My tribute to genius Lucia Berlin in Vanity Fair. She transformed my writing.

The online companion to the book, and a great research tool.